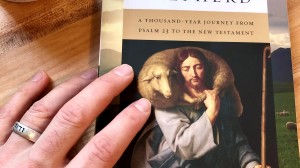 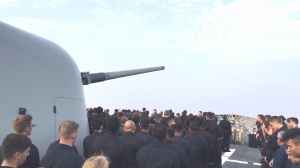 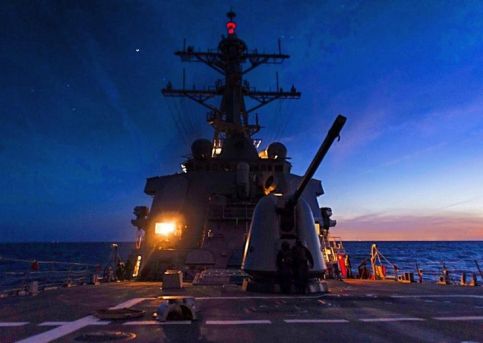 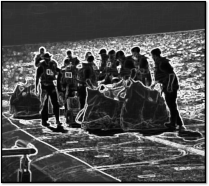 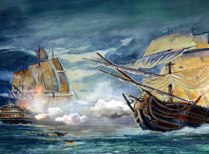 Aboard ship, plastic and metal are sorted and sent off-ship to be disposed of, but due to limited space we cast the bio-degradable excess food and paper waste overboard.

It’s kind of a cathartic heave that we call “Night Ops.” It has a finality to it, and is often done under the cover of darkness.

The Jesus Christ we meet in the book of Mark is so compelling that we must cast overboard the oversimplified Jesus we may have come to hold on to. The real 3-D Jesus, means to do away, lightning fast, with our misconceptions of Him and His kingdom. It’s not to shock us, but there’s fire in His eyes. It flows from the purity of His love that will not be muted, redirected or dampened. He must be for us the true Savior. There’s no domesticating Him, no making Him docile. For Jesus knows that such a 2-D Savior can’t save.

A 2-D conception of Jesus may come from Christmas and Easter stories we know.

The Miracle Baby in Bethlehem…
Or the picture of the Suffering Jewish Messiah we see on the cover of Time and Newsweek every Easter.

If we grew up in Sunday School or have read the Gospels, our conception is fuller.
He fed 5000 with just 5 loaves and 2 fish.
He walked on water!
He healed the blind…
Was betrayed by Judas one of His most trusted friends.

But, I have a feeling, that over the years, our understanding of Jesus has flattened, become more comfortable than the true “Jesus”…he’s 2 dimensional. Not quite real-life.

So, my friends, you know those habits we want to kick during deployment?

Let’s consider kicking another even more destructive pattern. Let’s do night-ops with the 2-D Jesus! Throw him far, and fast over the side for good.

Now’s the time to do it! As we get into the groove of early Deployment, we can recalibrate and correct. If we don’t, the sinful patterns in our lives that harm us and our loved ones will remain unreached.

But if we “night-ops” the 2-D Jesus, we’ll truly say hello to the real Jesus,
powerful, active,
even revolutionary and surprising…and be met by Him, in the pages of Mark as we study. Then experienced in real life, worshiped and obeyed, known intimately by us as God’s revealed only Son.

2-D Jesus can’t save me, or you. He’s too pliable, soft, conventional to be trusted as CO of your life, but the real Jesus is worthy to be Master. He’s Lord of Eternity. Let’s look for Him friends, and not settle till we do. If we do I’m convinced our faith will spring to life—

3-D Jesus will come to visit us and bring His Kingdom Life to the passageways, workspaces, ladder wells and berthing of this 567 foot warship that for over half a year of our lives is now home. He’s here. Present to change our lives for eternity.

FACTS ABOUT MARK TO GET US STARTED

As we set out studying Mark, here’s some background.

John-Mark wrote between 55-65 CE, most likely from Rome where he was a respected Church leader. He is describing the events of Jesus’ life, death and resurrection that took place just 20-30 years before in Ancient Palestine.

Mark was a mentee of Peter’s, and a relative of Barnabas, a critical leader of the early church who was a close associate of the Apostle Paul.

Mark was bilingual, comfortable in Greek and Hebrew language and culture. His name reflects that, John being Hebrew and Mark, of Greek origin.

His Gospel often explains Jewish backgrounds to events, and translates the Aramaic words that Jews would have known. In this, we can sense that Mark wants to translate to his Roman audience who Jesus is.

Rome had a warrior culture based on ethics and law. Commoners could rise to great levels of leadership. You’ll notice in the book of Mark there are no genealogies pointing out Jesus’ pedigree to show a well-connected heritage. Jesus is the humble Son of Man.

Jesus, Mark wants us to see, is full of action. 18 miracles are recorded, while the parables mentioned are only 4.

This Jesus speaks and means it.
He confronts the powers that be.
Stirs the pot.

Awes his disciples and the crowds. He would have impressed many Romans too. John-Mark writes assured of this.
Some themes of Mark are how the cost of discipleship will involve suffering but lead to victory and freedom.

When we observe Jesus’s surprising authoritative actions we should ask “Who is this man?” And…as we find ourselves surprised by His actions or reactions, also ask, “did I know this about Jesus?”

Then they went into Capernaum, and immediately on the Sabbath He entered the synagogue and taught. And they were astonished at His teaching, for He taught them as one having authority, and not as the scribes Now there was a man in their synagogue with an unclean spirit. And he cried out, saying, “Let us alone! What have we to do with You, Jesus of Nazareth? Did You come to destroy us? I know who You are—The Holy One of God!”

But Jesus rebuked him, saying, “Be quiet, and come out of him!”

And when the unclean Spirit had convulsed him and cried out with a loud voice, he came out of him.

Then they were all amazed, so that they questioned among themselves, saying “What is this? What new doctrine is this? For with authority He commands even the unclean spirits and they obey Him.”

And immediately His fame spread throughout all the region around Galilee.”

As we meet Jesus, early on we find–He’s got guts! Jesus didn’t go into the Synagogue the way the establishment might expect a bright new teacher to break the ice, methodically and respectfully building a name for himself, quoting lots of great Rabbis and giving his own unique spin. No, the Jesus, Mark introduces us to, went in to smash tablets!

Here in the synagogue, in his first public appearances, He’s not the soft spoken, gentlemen scholar…

Don’t picture Jesus pushin’ up rounded glasses on his nose, wearing a long robe and nasally offering up some words hesitatingly:

You know, why don’t we, ahem (nervously)

Course correction to our theology…and remember its, uh,

important to do good on this date, the Sabbath, too.

Why the Good Lord made this day in the first place.

But NO. This won’t be Jesus’ way. He’s not political. The Real Jesus, 3-D Jesus is forthright.

With a few words and big deeds, Jesus upends these debaters–Scholars and legal geniuses, steeped in Judaism’s ever expanding oral tradition. He knows how to get his point across and he does it boldly, fearlessly. It’s love. But in a love-way we’ve never known.

Pure as the gaze of One who has no ill-intention, whatsoever. But who will not be derailed, distracted, moved even an inch from the truth, the surgical seismic shift that the Kingdom brings.

No, with a SHOT across the bow he speaks out!

Nope, this is not the Swedish Jesus with the Beauty Sash that Pastor Rob Bell warned us about. This is the Jesus who can save lives, even Yours and mine.

NOTE: ‘A shot across the bows’ derives from the naval practice of firing a cannon shot
across the bows of an opponent’s ship to show them that you are prepared to do battle. A
warning shot, either real or metaphorical.

One Scholar says that there’s such fast movement to Mark, from scene to scene; immediately this, then THAT happened…(42x “immediately—euthus” in Greek is used) it’s as if Mark is breathless and can barely contain the news. Because it’s not meant just for Him, for Jerusalem and Israel who first heard it, or just for Rome…it’s news of the in breaking of the Savior for everyone. The Heaven’s are rent. All is changed. The Lord has come down. (Isaiah 64 and Mark 1:9-11.)

The next 4 weeks we’ll look at the 16 chapters of Mark’s Gospel. Four each week. We’ll get close up to Jesus, where His troubling and surprising actions can force us to consider who He really is. And what His Lordship in our own lives, aboard Bunker Hill, are to mean.

From the first four chapters I encourage you to think about the following surprises of Jesus’ Kingdom way and Kingdom message.

(Mark 3:20-30 Searing, Fearless Return of Fire to the Powerful Opposition)

-His Unlikely Choice of Followers

-His Rare Determination and Intentionality

-His Willingness to Break with Tradition

(One of the Key Functions of God giving us 4 Gospels…is we receive not four ancient
“photos”of Jesus but four Holy Spirit-breathed portraits, supernaturally designed to                  bring out the texture in the personality of our Lord. )

-His Being Impressed by others’ Faith:

-The Wide Inclusion of All in His Message

-His Culminating Messianic Entrance –Rejected though Perfect in Time and Space

At His baptism, the scene perfectly portrays God’s prophetic promise fulfilled. He
has come down to rend the heavens (Isaiah 64:1-5)

Challenge: Read through the first 4 chapters of Mark this week.

Prayer: Lord, I’m doing some Night-Ops as I begin deployment (or whatever new faith-demanding venture you’ve begun). I’m chucking the 2-D Jesus that can’t change my life or save me. That 2-D Jesus is going deep down with a cannon-ball crash into the South Pacific. Instead, I’m getting on my knees, imploring you to reveal to me the Real Jesus Christ, revealed by John-Mark in Your Word. This Jesus, though I’m frightened to commit to it, I will serve and obey, if only You’ll reveal Him to me by your loving, HOLY, ever-present Spirit. Amen. 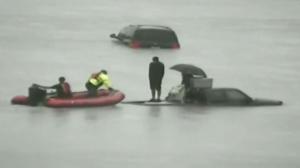 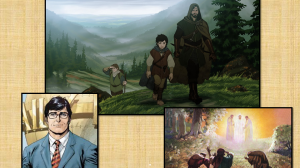 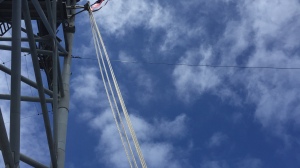